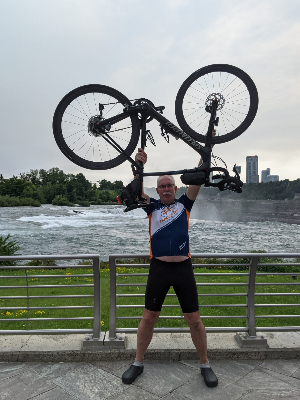 Last year I participated in the Empire State Ride in memory of Chad Ewings and it changed my life. The experience was transformational. The people I met on our 7-day trek  across New York State taught me that this incredible bike ride was really not about the ride. It was about people and  how cancer has affected their lives and the lives of so many loved ones.

I'm returning next  year now as part of a team who I met on last year's ride. It is called team T-Strong in memory of Theresa Lewandowski who lost her battle to  this terrible disease. I rode with her husband Jerry on last year's ride. Jerry showed up to ride in her honor not knowing anyone. The first day he fell off his bike and thought he broke his wrist. He wrapped his wrist with duct tape and rode all 560 miles over 7 days. He would not stop. Jerry’s spirit and love for his wife inspired me to step up my game in our fight against cancer.

Please consider donating to my efforts today. No donation is too small, and every dollar adds up to something greater than what any one of us could ever accomplish alone. Join me in making a difference.
View More