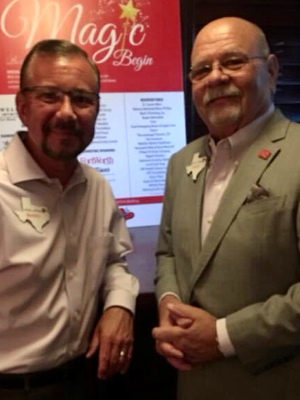 The Empire State Ride is more than just a bike ride. This year I will be riding in honor of my BFF Frank Testa. In late 2020 Frank was diagnosed with prostate cancer. After several tests it was discovered that it had spread to two other places. Thanks to some great doctors and discoveries in treatment they have been able to stop it in its tracks. They would not have been able to manage this without the research and development of new treatments. Frank served in the US Navy and spent two combat tours in Viet Nam. Frank then worked 32 years in healthcare as a Registered Nurse and Director of Risk Management. Frank should be currently retired but continues to help people serving on non-profits and as a Realtor in Fort Worth. Frank is the most selfless, caring and loving person I have ever known. His greatest joy is serving and doing for others. Knowing Frank has made me a better person.
Everyone knows someone whose life has been affected by cancer. This is my opportunity to make a real difference and impact the state of cancer research from the seat of my bike. Together, we can fuel groundbreaking discoveries and bring an end to this terrible disease.
I have set an ambitious goal this year but together I know we can do it. Please consider making a donation today. No donation is too small, and every dollar adds up to something greater than what any one of us could ever accomplish alone. Join me in making a difference.
An interesting/funny note: On Wikipedia Frank Testa was an American cyclist. He competed in the tandem event at the 1932 Summer Olympics. Born October 7, 1903 New York, New York, United States.
View More

Milestone
Raised the amount of money defined for this milestone