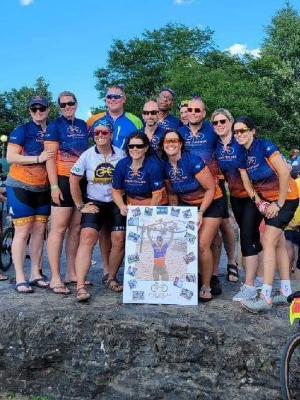 ESR 22 - Some of us Regulators!
I never expected to find this greater calling when I signed up for my first Empire State Ride in 2020.  Four years later and WOW!
The Empire State Ride is more than just a bike ride. July 2023,  will be my 4th time riding 500+ miles across New York State TO END CANCER.  It's an amazing event that truly changes you.  If you haven't done it, it's really hard to understand the bond you form with the friends you make.
Unfortunately, each of us knows someone whose life has been affected by cancer.  Personally, I've lost some friends over the years, and my father-in-law, Jerry,  in 2012.  His diagnosis of stage 4 esophageal cancer rocked our entire family, especially his battle in his last year.  A great man gone far too soon.
Last year I rejoiced when my friend's son, Karsen (age 10), had clean scans and rang the cancer-free bell that January.  His battle began in August of 2020.  Unfortunately, in August '22, he discovered another mass.  His cancer had returned.  While he is a fighter, it's an uphill battle with a slim 8% chance of kicking cancer's ass.
Cancer knows no bounds...regardless of age, gender, goodness or evil, it strikes who it wants, when it wants to.
We've also been blessed to know many who have been diagnosed with various cancers only to become survivors!  In the end, none of us are going to live forever.  But, we should all be able to live each day to the fullest without the worry of a cancer diagnosis or the agony of the treatments.
This is my opportunity to make a real difference and impact the state of cancer research from the seat of my bike. Together, we can fuel groundbreaking discoveries and bring an end to this terrible disease.
Please consider making a donation to my efforts today. No donation is too small, and every dollar adds up to something greater than what any one of us could ever accomplish alone. Over the past three years, my efforts have raised over $15,000.  I couldn't do that without the love and support of each of you.
This year I want to do even better and top $7,500!  Join me in making a difference.  Of the 230 of us that rode last year, we raised over $1.6m.  Truly amazing!
Thank you for your support!
View More