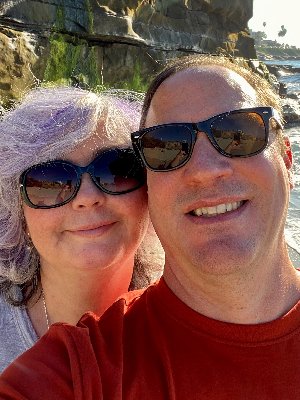 Debbi & me in La Jolla California

My wife, Debbi, was first diagnosed with stage 3 colon cancer in September of 2009. Since then, she's been moved up to stage 4 with several metastases to her ovaries, abdominal wall and muscle, lungs, liver, pancreas, chest cavity, and chest lymph nodes.

Towards the end of 2020, we found out that chemo is no longer effective at eradicating the cancer. It will become undetectable, but after chemo is stopped, it returns. Additionally, her body began to tolerate the chemo less and less.

Her oncologist recommended that she investigate phase one trials, because they've exhausted every other avenue of treatment. Phase one trials are the riskiest. As one of her doctors said, that the trial is not intended to be a cure, they are testing for the toxicity of the treatment, a cure, or remission, or NED status is a potential benefit.

So, Debbi reached out to her doctors at Roswell. We traveled to Buffalo, and she was put on the waiting list for several, but one trial was most promising. Unfortunately, after months of screening tests, and scans, the trial was closed because the lead researcher relocated to another hospital.

With that door closed, Debbi went back on the chemo cycle, a break, chemo, break, chemo…  Each time, the cancer would return in the same spots. Then chemo again. After the last interval, she was determined to take a different approach. She advocated to see a radiation oncologist for treatment. Earlier this winter, she completed 10 treatments of IMRT and SBRT radiotherapy. The good news is that the mets in her chest seemed to have resolved, while the met in her liver shrunk but not entirely resolved.

Since our first visit, the staff and doctors at Roswell have gone out of their way to help us feel welcomed. Our home is in Rochester, NY and she receives primary oncology support through the Lipson Cancer Center at Rochester General. Still, we've been to Roswell several times for consultations and information on any upcoming trials.

Between chemo, radiotherapy, and immunotherapy, Debbi still refuses to give up. She's a fighter, and she's the reason I'm doing this.

Please consider making a donation today to help find cures. Together, we can make a difference.

Debbi has kept a journal of her battle on her Caring Bridge site: https://www.caringbridge.org/visit/debbikeller