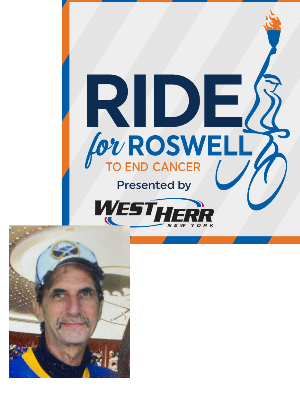 The Ride for Roswell is something I’ve been wanting to do for quite some time, and I’m so excited to be able to say that I’ve raised so much as a dime to help cancer research.
A little backstory.  I’m riding in memory of my dad.  He was diagnosed with Prostate Cancer, which he successfully overcame!  It was such a scary time.  Everytime he said he was going to Roswell to get his levels checked, we’d always hold a breath and anxiously wait for his labs to come back right until we were certain they were right where they need to be.  A few years later,  dad was in the emergency room.  We thought that he had a stroke but instead he was being diagnosed with a very large tumor on his brain.  The look of fear on his face when hearing that news is one that will stay with us all forever.  We all had that same fear, it was horrible for his family, so I couldn’t fathom what was going through his mind. Terrifying would be putting it lightly.  I could continue on with health scare after scare, surgery after surgery, and a decline which we refused to see or accept, but this is where I end this story because this is the strength that is pushing me to ride.  I never want anyone to feel the terror that my dad felt.  I never want anyone to have that image of a cancer diagnosis in their heads forever.
If you are considering donating,  I thank you so very much.  As I said,  it’s something I’ve wanted to do for quite some time and I appreciate your support for sharing this great cause.
View More
Donate Now
The Pedal Pushers
Achievements