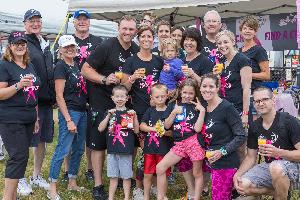 Thank you for visiting our team page. We are excited to be riding together to end cancer in The Ride For Roswell. This is much more than a bike ride —  it’s our commitment to create a world where no one has to fear a cancer diagnosis.

Whether you choose to join our team or make a donation, YOU are making a difference in the fight against cancer. You are helping to fuel cutting-edge cancer research and compassionate patient-care programs at Roswell Park Comprehensive Cancer Center.

Your donation might provide the funding that the researchers at Roswell Park need to investigate new treatment options that can save lives. These therapies can provide cutting-edge treatment choices to patients in our own community and in cancer centers worldwide.

You can make a difference in the fight against cancer by supporting our fundraising efforts. In fact, for every dollar donated, Roswell Park can leverage an additional $13 in new grant funding!

Thank you in advance for your support! Together, we can help find cancer cures and save lives.

My story goes something like this: (Entry from RFR 2018)

I had my yearly OBGYN appointment in July 2017 and my doctor wrote me a script for my first mammogram.  She was sending me at age 35 instead fo the recommended age 40 because of my family history of breast cancer (my grandmother and my aunt).  I waited until September, since that's when I had a day off from work, and off I went.  I went to a local imaging center and had my baseline 3D mammogram.  That was September 13, 2017.

I was told to come back in 6 months for a follow up mammogram.  I had an area of "microcalcifications", and the radiologist wanted to image the area in 6 months to be sure nothing had changed.  For some reason, I wasn't ok with waiting 6 months, and my OBGYN agreed that this probably warrunted a biopsy.  She gave me a list of places I could go for a second opinion and biopsy, and I chose Roswell.
It took me a month to get an appointment at Roswell, since the first imaging center said my area of concern was "probably benign".  I was seen by a surgical oncologist on a Tuesday, had my biopsy that Thursday, and Friday, October 13th received a phone call that I had cancer.  Cancer.  Ugh, still makes me shiver.
The following weeks gave way to more appointments, tests, MRI, genetic testing...
I was diagnosed with Ductal Carcinoma In-Situ, Stage 0.  Stage 0, I'm lucky.  My MRI revealed a large tumor in my left breast (from my nipple to my chest wall) and a "questionable" area in my right breast.  Unfortunately, due to the size of the tumor in my left breast, I had to have a mastectomy.
I'm still in disbelief.  But I'm good.  I'm thankful and blessed that my dance with the devil was relatively short-lived.
I'm choosing to participate in the Ride for Roswell this year as a way of saying "thanks" to a place that saved my life.  Funding cancer research surely hits close to home now more than ever.  Please join me in the fight against cancer!!
~Callie
Fast forward one year....it’s now the end of March, 2019.

Lots of healing has happened in the past year and half...mentally and physically. I still think about cancer on a daily basis, but not nearly as much as I used to.

I still feel like a “lucky one”. A friend recently said that he feels like he “cheated” the disease because his treatment was not near the extreme that some people suffer through. I’m on the same page. My brief time with cancer sucked...big time...but I escaped relatively unscathed. Surgery and out...who can complain?

I’m riding this year because it makes me happy, it makes me feel good. I’m riding for all those who didn’t escape unscathed. It’s honestly not about me. It’s about the ones still fighting the fight, still reaching out for anything to make them better...anything...to cure them.

Join me in helping a great place that searches for a cure for cancer! Hope to see you on June 22nd!!