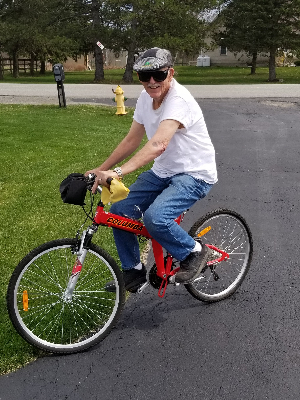 Dad practicing for the Ride for Roswell, May 2021

When he first rode in the Ride for Roswell, our dad, Jim Sheehan, dusted off an old bike, borrowed a helmet, and wore the orange shirt of a cancer survivor. We had planned to ride it again, but in 2019 he had inexplicably lost weight; his knees had deteriorated to the point where he was using a walker. At Thanksgiving, we had to help him up two steps at Mike’s house. At Christmas, we had to help him down three steps at Annie’s. Paul got him a pedal machine to try strengthening his legs. Afraid he was dealing with a new cancer, his doctors told him he could not get surgery to relieve the pain in his knees. It was around this time that he went to Roswell for the first time.

It was not his first interaction with Roswell. They had treated his mother, Evelyn, and his sisters Mary and Joan.

Roswell found what was wrong and through their help and expertise, he was put on new medication. Soon after, he began physical therapy to rebuild his leg muscles and help his knees. By spring, he had regained weight, was walking without any assistance, and was faithfully doing his exercises. Though he could not quite keep up with our mom, Judy, he would join her on walks.

When we talked about doing the Ride for Roswell, he was cautiously optimistic he could ride, too. By early 2021, he knew he could ride--at least as far as his youngest grandson.

We wanted to ride to support Roswell as they have supported us--Dad, our aunts, our grandmother. But we also wanted to ride to honor him. When biking in a group, riders are able to draft off each other, get support from their team. Our team--his wife, children, in-laws, and grandchildren--was put together to show how proud we are of Dad and to try letting him draft off us--since we’ve drafted off him in so many ways for our whole lives.

It’s not the way we wanted to ride, but now instead of riding with him we will ride for him.