Open eyes and open hearts for our 2020 Ride! 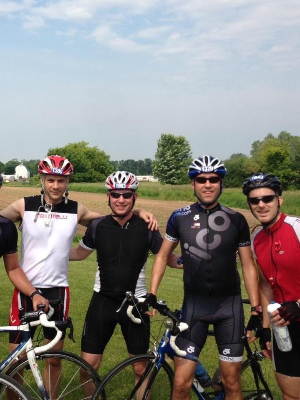 Today was supposed to be the 2020 Ride for Roswell. Who could have predicted last year that we’d be where we are now? It’s a good reminder that life can change in unimaginable ways. I’m reminded of that every time this picture comes up in my Facebook memories. It’s from the 2014 Ride for Roswell. My brother Brian, Ross, and their friends rode 100 miles that day. Six months later, Ross would be diagnosed with a lethal form of acute myeloid leukemia.  Like I said, hard to predict.

My annual Ride for Roswell post is never easy to write. The process brings up emotions that I sometimes like to keep at an arms-length (it’s hard to sit with grief every day if you want to be a functional person in the world). But this year, it’s been even harder.

When Ross was sick, I would repeat mantras to myself. The one I used most was “deep acceptance”, but not far behind that was “I am glad I’m with the sufferers”. It’s what I would say when we got bad news. Honestly, before Ross’s illness, I was on track for a relatively easy life. Sure, I had experienced disappointments and inconveniences, but nothing that showed me the depth of suffering that really exists in this world. Before Ross’s illness, I thought I knew what pain, injustice, and loss were because I carefully read news stories, studied history books and watched documentaries. But the truth is I had no idea. I floated over the surface of actual suffering. I was an occasional tourist. I was a well-meaning observer who was glad to give to those in need, but never wanted to be in need myself. I was smugly safe.

Becoming a sufferer meant having my eyes forced open. I was made to see the world as it actually is: a place where people experience pain that I previously thought I was shielded from. I became part of a long line of women who watched their husbands suffer and die. At least mine was dying in a hospital. Many of you remember that Ross frequently talked about the Syrian refugee crisis. He’d say “Anne Marie, right now there are people dying of leukemia in refugee camps. They don’t even know why they are sick, and they definitely don’t have access to chemo.” He would say this as chemo was pumped into his body, knowing how sick it would make him. Having your eyes forced open makes you acutely aware of your privilege, even in your suffering.

For both Ross and me, becoming a sufferer resulted in an extreme, all-encompassing empathy...like gaining a new sense. I thought of Job’s response to God, after being beaten, tested, brutalized: “I had only heard about you before, but now I have seen you with my own eyes.” And though, if given a choice, I would have opted out of this terrible good-and-evil knowledge, I was glad to have it. I couldn’t be willfully naive anymore.

Donating to Ride for Roswell in the midst of this moment may seem like a low priority...but I believe it’s a way that you can take concrete action at a local level. Your money will do two important things: 1) ensure that Roswell is able to keep its staff and patients safe, and 2) remove financial obstacles to cancer treatment. I am proud that our family’s efforts helped ensure in full funding for HLA testing for those undergoing stem cell transplants: https://www.roswellpark.org/sites/default/files/donor-dollars-fall-17_0.pdf  No one should have to borrow money to find a bone marrow match.

If you are not in a position to make a financial donation this year, you can donate blood or platelets, get registered on Be The Match, or join our team (our plan is to do a low-key 10-mile family-friendly ride in August).

Yes, this is not the Ride I expected, but this is also not the life I expected. My eyes are open to suffering, but they are also open to the transformative power of empathy. They are open to possibility and truth. With gratitude, I thank you for keeping your eyes open with me, and donating to Luca’s ride in any way you can.