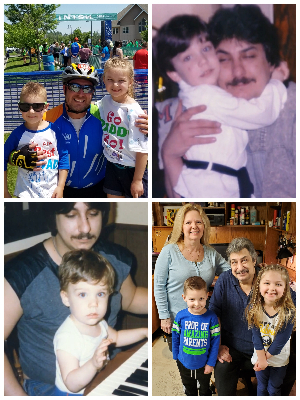 With one in two men and one in three women in America being diagnosed with cancer in their lifetime, most of us know someone who has been affected by this devastating disease. You can make a difference by supporting me in The Ride For Roswell. Funds raised through The Ride support cutting-edge research and compassionate, innovative patient care programs at Roswell Park Cancer Institute.

This past year I found out first hand what cancer is capable of. In early January, my Dad came over to watch the Bills playoff game and was experiencing severe back pain. He tried to figure out what it was for weeks before ending up in the emergency room at Mercy. At about 2 am, the doctor came in and told us after reviewing his CT Scans they found several large tumors on his lung, his liver, his lymph nodes and assumed his bones. He had stage 4 cancer. He went for emergency surgery in early February to remove a tumor from his spine and then started radiation shortly after. Unfortunately, the cancer had spread so far so quickly, there was not much that could be done. Roswell gave my Dad several options but my Dad ended up having to just go with palliative care for the extreme pain he was in. He suffered each day as his body slowly shut down, still keeping his spirits up as much has he could. The cancer ended up winning in the end, and took my Dad's life on June 19th, his 59th birthday. He died too young. He had a lot of life left to live, and cancer took that away from him, away from us. I am riding so one day families won't be torn apart and loved ones won't be lost to cancer. I hope one day we will find a cure and no one will have to suffer like my Dad did.

This will be my 9th year riding in the Ride for Roswell, having completed the 30 mile river route once, the 33 mile country route once, the 45 Mile country ride twice, and for four years in a row I visited our neighbors to the north on the 46 mile Canada route. This year I will be riding in a reimagined distance ride due to the pandemic, and will be riding a 20 mile ride on Grand Island this August 8th. In the 8 years that I have rode, we raised over $6,000 for cancer research. I say "we" because this is truly a team effort. I hope to raise at least $500 for Roswell, with a stretch goal of $1,000. Please consider making a donation today. Together, we can help find cancer cures and save lives.

I will be riding this year, and every year, in the memory of my Dad.