Help Sammi Raise Funds to GET RID OF CANCER!!! 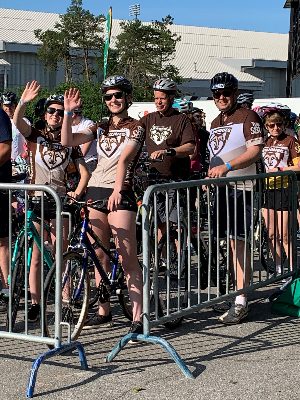 That's me on the left, and my best friend Ainsley, and my grampy, my dad and Mrs. Zlockie -- members of Team SBU #CarneyStrong -- all ready to Ride for Roswell two years ago.

Please help me GET RID OF CANCER with a donation to help cancer research at Roswell Park!

Every dollar goes to help research the prevention, treatment and even help find a cure for cancer!  They are doing so many awesome things to help get rid of this horrible disease! When I was an intern at Roswell I saw first-hand how the money is used for important research.

I was so sad when I heard that one of my past team members and supporters, Ann Swan, passed away from cancer two weeks ago after surviving two previous cancer battles -- she was treated at Roswell those times and was so grateful for the care she received there. Mrs. Swan was such an awesome person and so fun to be with on Ride days, and I’ll miss her so much. So this year I’ll be riding in her memory, along with the many other family members, friends and supporters I’ve had for the past 11 years who are cancer survivors or lost their battle to cancer.

I hope you can help! Thank you again!