"SOMETIMES, THE HARDEST THINGS IN LIFE ARE WHAT MAKE YOU THE STRONGEST." ZIAD K. ABDELNOUR 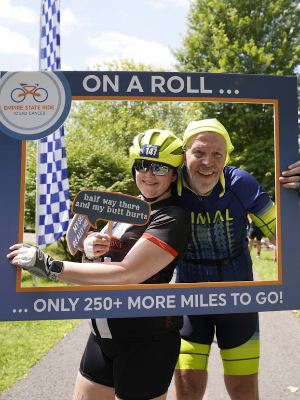 Quite a few of us, actually. In some way, we are all touched by cancer. Some have it. Some have lost someone or multiple someones. Some work with it. We all felt compelled to have an impact instead of just allowing ourselves to be impacted. While I, and many of my fellow riders, had done the Ride for Roswell, taking on a 7-day cross-state bike ride was something much more significant – in time, energy, effort, emotion and most of all, overall dedication. You can’t just hop on your bike tomorrow and say, I’m going to do it! Hell. . . I learned you can’t just train when you have a “free” moment and call it good enough. You can’t just sign up on the day of because you’re bored. It takes something (crazy) within you to say that you want to do this, instead of just throwing money at a cause to make it shut up and disappear. A cross-state bike ride is loud and obnoxious and in-your-face and makes people AWARE that those who are crazy enough to bring about change, usually do.

All of that aside, this week was many things for me. It was cathartic to the extent I shared more than I would usually about how my parents’ deaths impact me. (Well, outside of the audience who may read what I write, of course.) It was painful, because I had to feel all of the feelings that I hate feeling. It was difficult, because I had to get beyond the war inside my head to let my body just do what it needed to do to get me across the state. It was enjoyable because all of these strangers that I met are now friends. It was inspiring, because I saw people doing something that others thought was insane.

I realized there’s a lot that I can do in a week.

I realized it is possible to have ridden a bike for 7 years (well outside of those years as a kid, of course), and still learn more in one week about how to improve than you did in that whole time previously.
I learned that it’s sometimes okay to not be okay, even if you’re not okay with not being okay.
I’ve learned to be a better rider because I had to be, instead of a better rider because I wanted to be, and that made me learn ALL that much faster. Now, I WANT to be a better rider. Funny how that works.
I can write upside down on my own leg with a sharpie – because I had to. Those names KEPT ME GOING ALL WEEK LONG.

I did many things I normally wouldn’t do. I spend a lot of my time alone, working remotely during the day and not really hanging out with too many people in my “free” time. This week though –

All in all, I still finished 75% of the mileage and rode each day. Was it what I expected? No. But that’s the funny thing about expectations. I didn’t expect to lose my parents to cancer 11 years apart. I didn’t expect to be so angry this whole time. I didn’t expect this anger to fuel me to do more instead of wallowing in self-pity, depression and sadness. What I did, and still do expect from myself is that I will keep trying, and keep learning throughout all of what I do on this earth.

I said this to a friend a few days ago, and it’s the thought that was in my head while I was I think I can-ing my way into the headwind past my mom’s neighborhood and where I spread some of my uncle’s ashes, having to stop and sob into my handlebars because I just couldn't keep it in any longer. This is NOT the hardest thing I’ve ever done. It kind of wants to be, but it pales in comparison to watching my parents decline because of cancer. It’s not even in the same league as losing my parents to this horrible disease.

Because of that? I’ll ride every damn day if I have to in order to help prevent someone else from losing a loved one, and giving me another name to put on my leg in tribute. And because of that, you’ll see me at this year’s Empire State Ride, with a new bike, and a year more training under my belt.

Please consider helping Team Forever Young and I in reaching our goal!